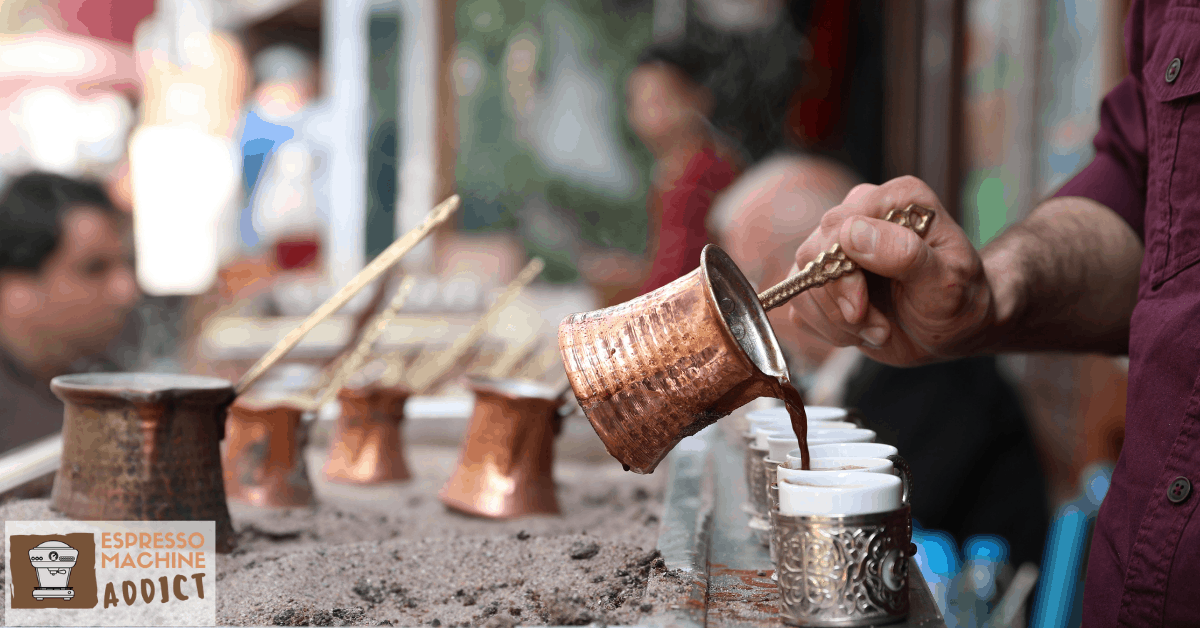 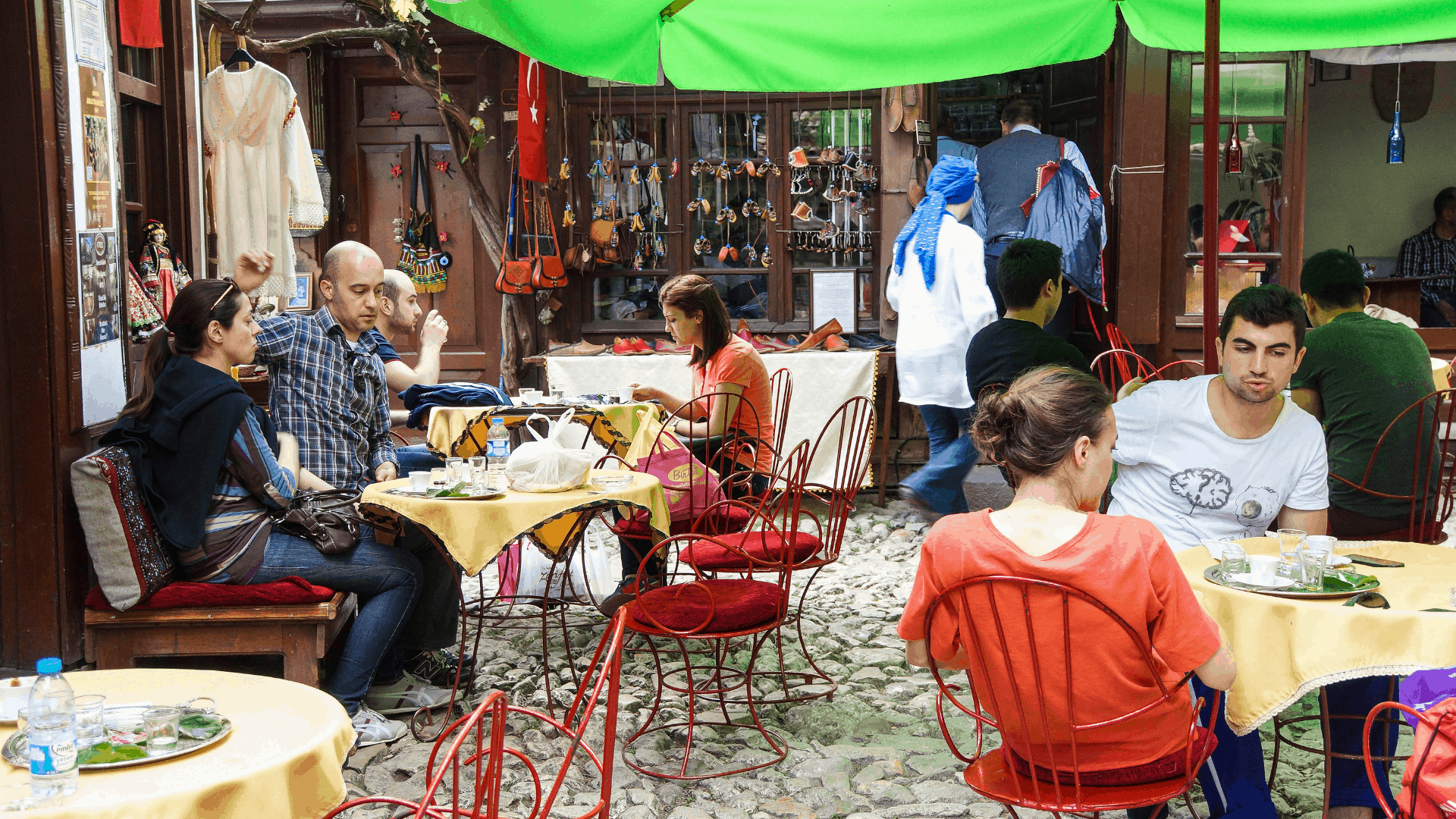 When people think of countries with strong coffee cultures, places like Italy and France usually come to mind first. However, coffee culture in Turkey is a long-standing tradition whose roots run deeper than most people would imagine.

Coffee plays a big role in Middle Eastern culture overall. Additionally, each country may take it in a slightly different direction, adding a unique aspect to the equation. Turkish coffee culture is a prime example of that, with crucial societal and preparation factors that make it unlike what you may find elsewhere.

If you are curious about coffee culture in Turkey, here’s what you need to know.

The history of Turkish coffee is a rich one, dating back as far as the 16th century, where it began making an appearance in coffeehouses in Constantinople, now known as Istanbul. It played a big role in social occasions, giving people a chance to gather and socialize.

Today, that sentiment remains. Enjoying coffee together is considered a symbol of hospitality, friendship, and community. It’s a chance for conversation and appreciating the company of others.

Coffee has been part of the area’s history for so long that it has been celebrated in song and story and integrated into special occasions. It may play a big role in engagements and wedding ceremonies, as well as holidays. There’s even a proverb that says, “the memory of a cup of coffee lasts for forty years,” noting how critical coffee is for special moments with loved ones.

When it comes to Turkish coffee cups, you won’t find large mugs like most Westerners use at home. Additionally, giant to-go cups aren’t usually part of the equation.

Instead, a Turkish coffee cup is a demitasse cup, which usually holds about half of what a regular-sized coffee mug offers, known as a fincan. It’s the size that’s traditionally used for after-dinner specialty coffees, including espresso.

Generally, Turkish coffee is also less about the bean and more about the preparation. First, it features a finely ground, nearly powdered coffee that isn’t strained from the drink. In fact, not unlike reading tea leaves, some believe that grounds that remain in your cup after enjoying the beverage can give insights into your future.

Second, Turkish coffee is imbued with sugar and specific spices while being prepared, giving it a rich flavor. Sugar and spices aren’t just an afterthought or thrown in once the coffee is finished brewing; they are a quintessential part of the brewing process. 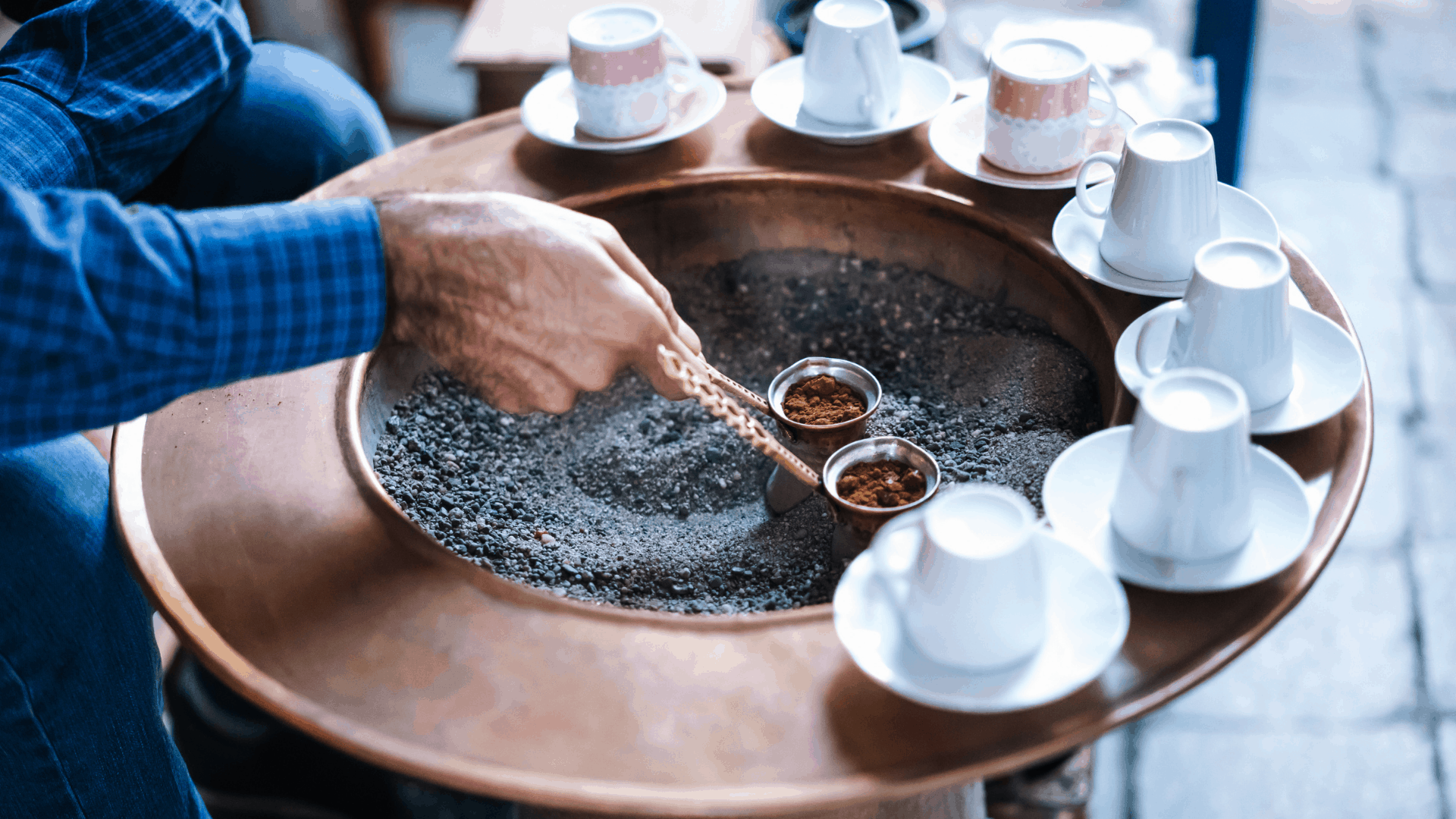 When it comes to Turkish coffee spices, the most important one is cardamom. It gives the drink its characteristic flavor, so including it is usually considered a must if you are going for a more authentic experience.

However, some versions may have additional spices. Cinnamon and cloves are popular additions, as well as nutmeg and vanilla. With any of those, they accompany the cardamom instead of replacing it, allowing the maker to add some extra flavor to the drink.

How to Order Coffee in Turkey

If you’re looking for a traditional Turkish coffee, ordering is incredibly simple. It’s generally referred to as Türk kahvesi, and you’ll usually only have a few potential options available, if any at all.

In some cases, you may be able to order it sade, which means without sugar. However, some places may not provide a sugar-free option.

You can also order coffee as you’d find in French- or Italian-style coffee shops. Getting an espresso or cappuccino is possible in some cafés, so you can order those using the approach that mimics that experience.

Since Turkish coffee is a specific beverage, it’s hard to make mistakes when ordering. The biggest misstep would be asking for customization, as that generally isn’t done. However, there are another couple of errors a person could potentially make.

First, Turkish coffee isn’t a dinner companion drink, so ordering it with your meal would raise some eyebrows. Instead, it’s usually enjoyed afterward or separate from a meal and is commonly accompanied by a sweet treat.

Second, milk and cream aren’t used with Turkish coffee traditionally. Requesting some or adding any won’t get you in trouble, per se, but it may turn some heads.

If you’re ordering cappuccinos or espressos, you may also want to shy away from too much customization. What cafés have available varies, and not all places will have options like milk alternatives or will have every flavor. 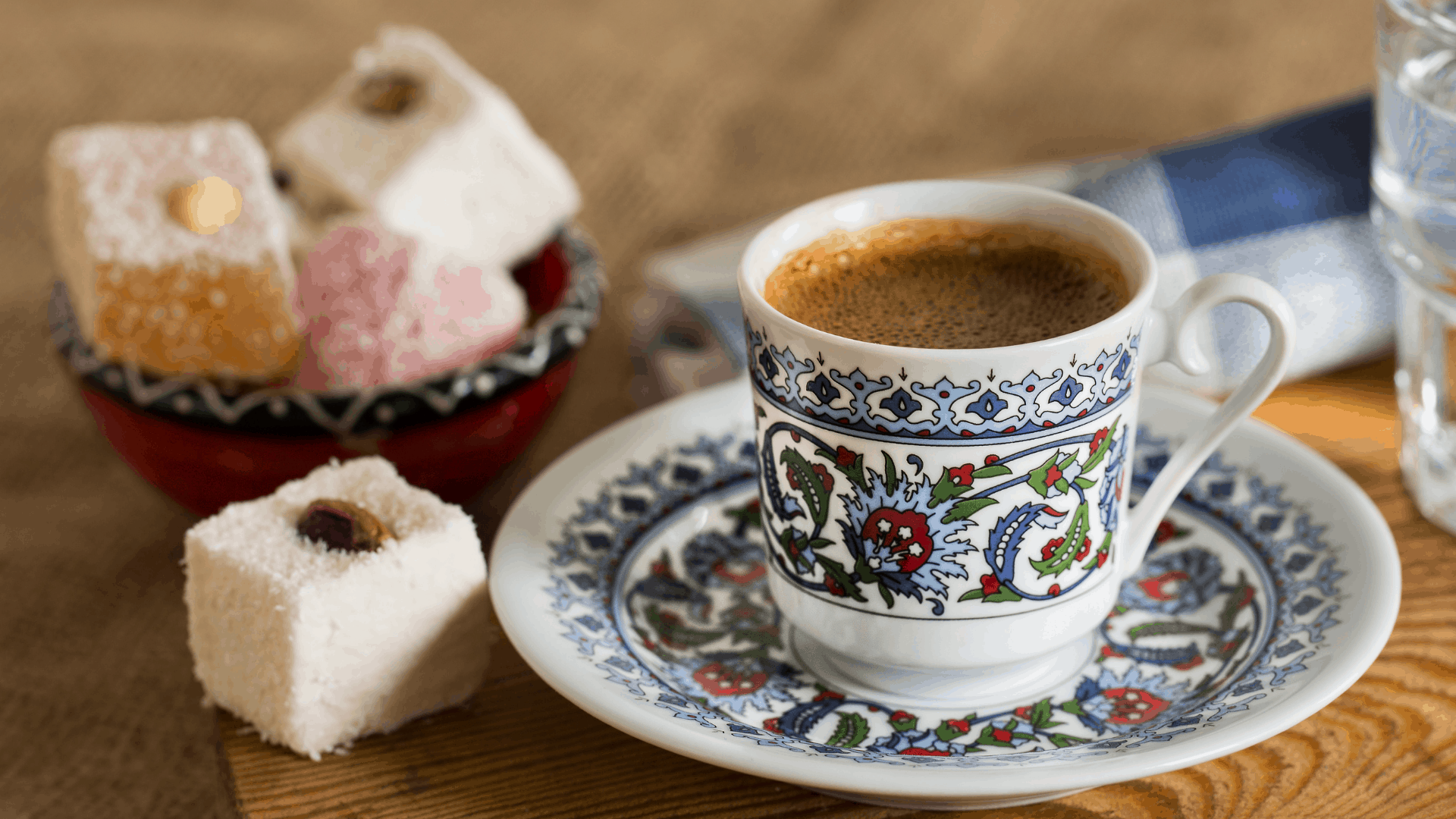 Where to Buy Turkish Coffee

If you want to enjoy Turkish coffee, you have a few options. First, you can find a restaurant that serves it. With that, you usually want to look for restaurants that offer traditional Turkish or Middle Eastern cuisine, as they are most likely to have Turkish coffee on the menu.

Second, if you are wondering where to buy Turkish coffee for home brewing, you can find some brands online. In some cases, you may find products that have the spices added directly to the grounds. However, you may want to look for an Arabica coffee that’s been very finely ground instead, allowing you to add the spices separately at the right moment during the brewing process.

There are quite a few Turkish coffee brands that can be purchased outside of the country. Some of the most popular include:

Just make sure that the product you choose has the right characteristics. If you want to make traditional Turkish coffee, you need grounds that are essentially like a powder, so choose an option that gives you the right texture for your perfect drink.

Turkish coffee culture is as much about the preparation as anything else. Luckily, when it comes to how to make Turkish coffee, the process is relatively straightforward, though is more complex than what many people make in their home.

You’ll need a small saucepan, as well. If you would rather be completely traditional, you’ll need an ibrik (or cezve), a Turkish coffee urn, or pot with a long handle for the brewing process.

Place the water and sugar in the pot and bring it to a boil. Once boiling, remove the pot from heat and stir in the coffee and cardamom.

Next, place the pot back on the heat and bring it to a boil once more. Leave it on the heat until a foam develops on the surface, and then remove the pot from heat until it dissipates.

Then, place the pan back on the heat again. When the foam develops this time, remove it from heat and pour the coffee into two Turkish coffee cups.

Let the coffee sit in the demitasse cups for three minutes, allowing the grounds to settle. After that, you can enjoy your cup of Turkish coffee. 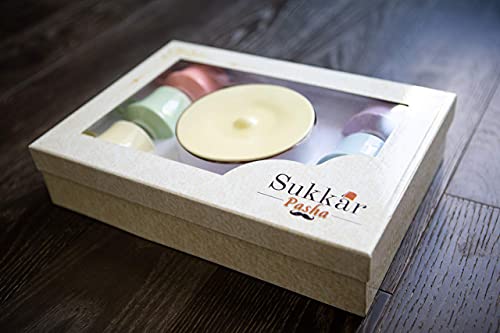 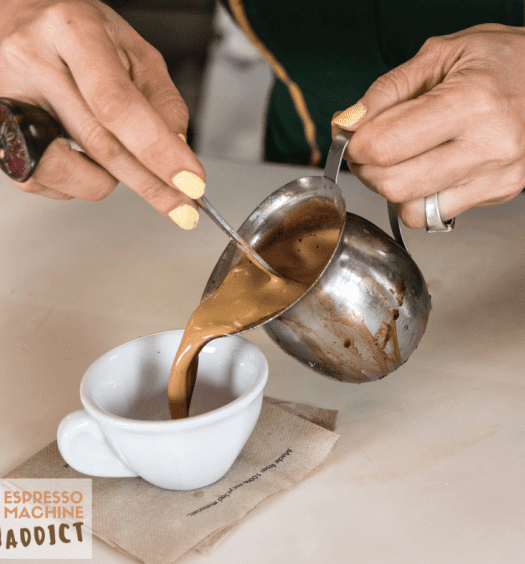 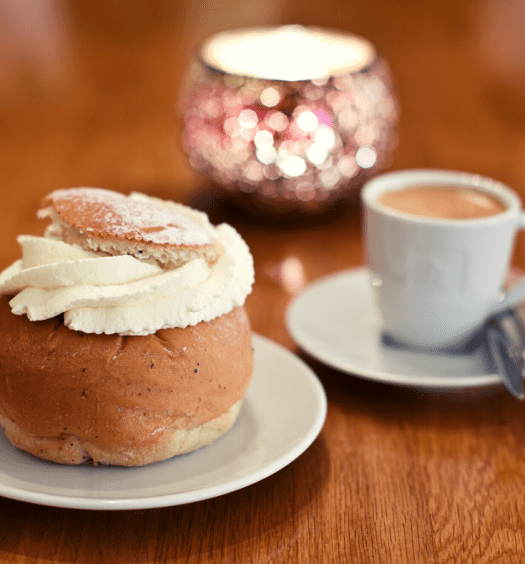